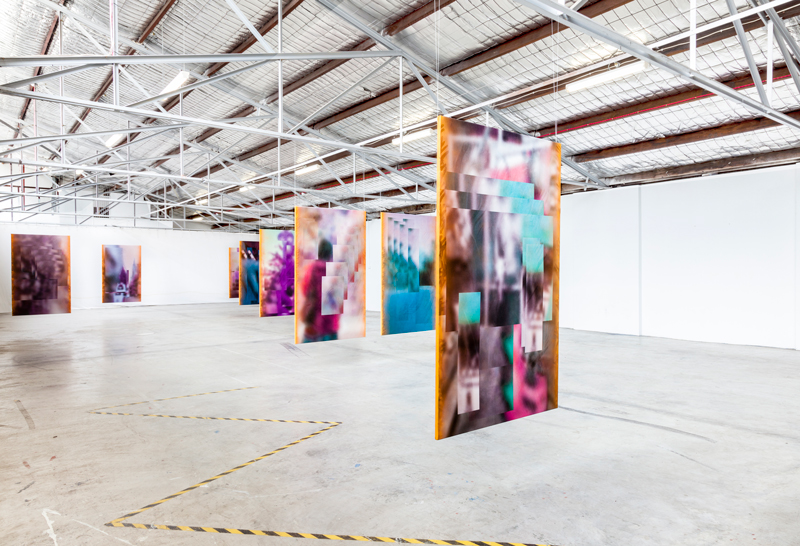 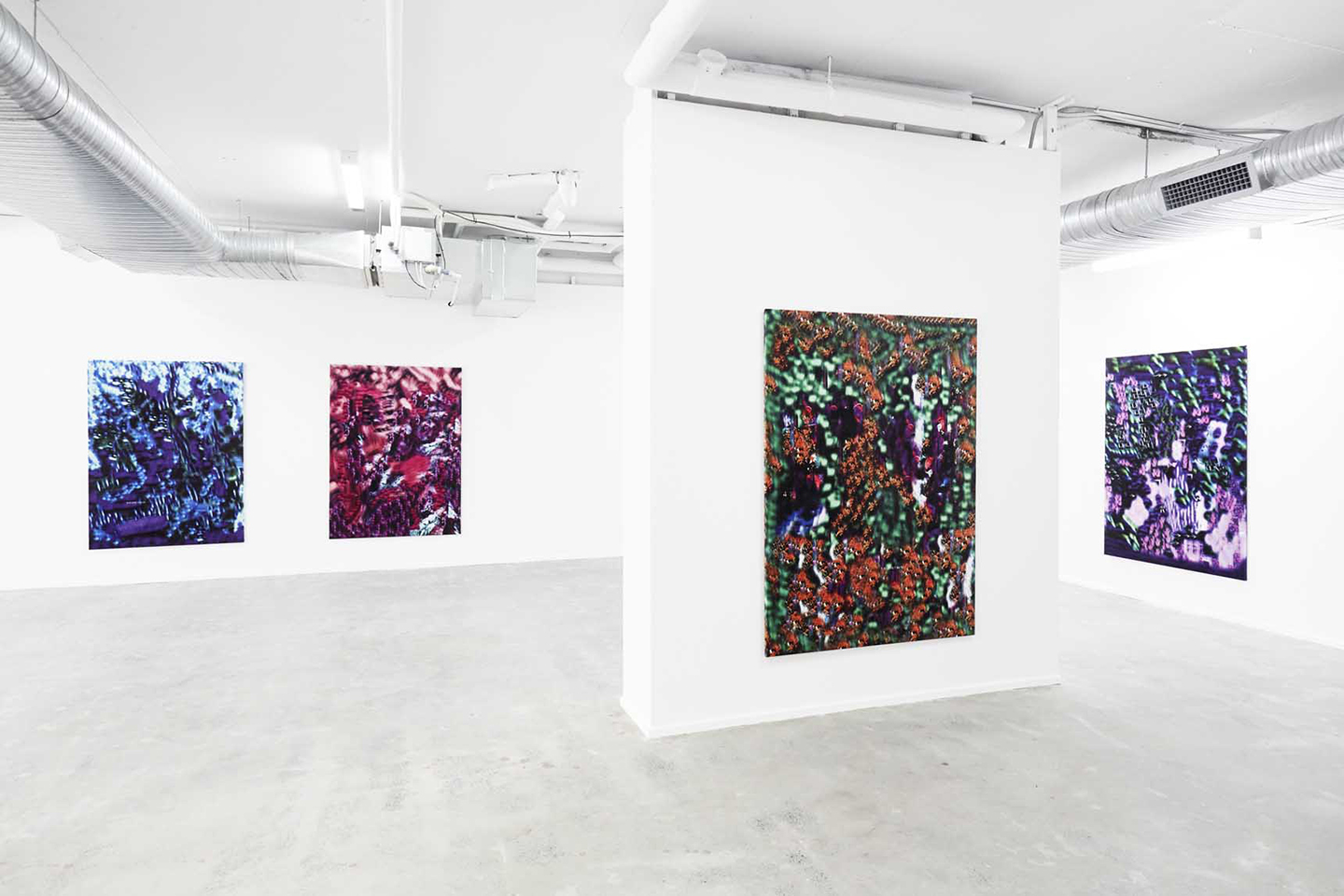 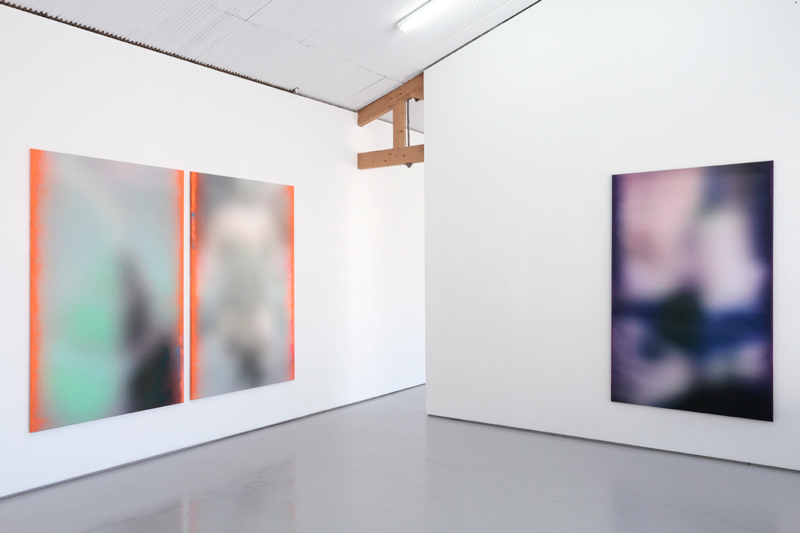 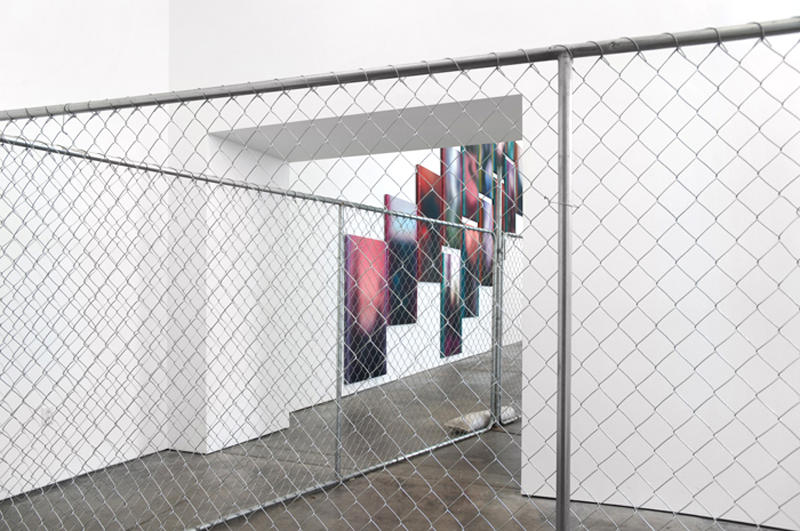 Uncalibrated Borders of the Screen Surface

There is something explicitly seductive about Ry David Bradley’s work. Images arise from a blur without any clear definition, bordering between the notions of painting and photography. Upon the first look the exact nature of the artwork does not submit itself to a singular interpretation. When one first encounters “Access All Areas” exhibition at Bill Brady Gallery, Kansas City in 2015 – the artworks set on a sterile white wall, beyond the metal mesh fence, one cannot help but be captivated by both the materiality and virtuality of the image, embossed with radiating, glowing hues of the screen object and intertwined with the dialectics of metal.

Ry David Bradley was born in 1979 in Melbourne where he completed his MFA at Melbourne University and is currently based in London. His work has become prevalent within the past several years and he is represented by Tristian Koenig Gallery in Australia, Bill Brady Gallery in USA and Evelyn Yard in UK.

Throughout his work, Bradley aims to address the intersections of the digital and the material aspects of painting within the current digital age of flux. The screen-like paintings represent a digital plateau, the ultimate flatness that is combined with the traditional lineage of painting - disrupted, disfigured, extended and reproduced, glowing like a backlit depths of the screen surface.

For Bradley artwork becomes a battleground of notions, something that he describes as an investigation between images and painting, particularly the ones derived from the network. Sourcing landscapes from online archives and using them as the point of departure, the images are then submitted to further filtering, distortion, displacement and cutting out, almost in a not too dissimilar sense from Henri Matisse’s cut out works. From then on, the digital image is printed onto synthetic suede using dye transfer, the dye itself becoming a gas embedded in textile, stretched onto canvas and further layered with spray-paint.

Despite the use of technology that defines Bradley’s practice, the artwork still remains deeply set within the tradition. To quote Alex Bacon’s essay for Rhizome, in a sense, painting has always existed in relation to technology, when the term is understood in its broad definition as the practical application of specialized knowledge: the brush, the compass, the camera obscura, photography, or the inkjet printer. In a way it can be claimed that painting exists not despite the changing, developing and morphing means of production, but precisely as a consequence of technological advancement.

The artwork transforms into a pure spectacle as an amalgamation of sharpness of the lens and haze of the abstract hues. The digital image assumes the qualities of a hologram, like a vanishing signifier. The surface of the painting itself is situated within a maze of interrelations. As Paul Kneale argues in Image Ageless article for Spike Magazine, as digital images increasingly perforate every aspect of our experience, artists have an opportunity to desublimate this chimeric ontology: by approaching this process as painting and materializing the results in a way that is reflexive towards the apparatus. The texture of the fabric itself is a part of a wider scope of modes of production and its networks. The digital technology allows the material confines of the painting to be embedded with signs and subjectivity, something that is inherent to painting as such.

Meanwhile, Not to be Digitized (2016) locates the interplay between the notion of the archive and interstice between painting, photography and history, using two sided paintings based on archival postcards from the New York Public Library’s Picture Collection. Employment of the motives of glitch and motorized repetition does not overpower and overcrowd, instead it is as if the lines of digital code have been erased, the binary numbers have been altered too many times, the data has been lost and has to be substituted only by the way of duplication.

Here the artwork reveals itself as a reflection of a domesticated horizon of the screen. In Watch Me series (2016) and Lands (2016) Bradley leaves the suede canvas unfixed that allows itself for opening of the space for audience interaction, remaining constantly in the state of flux, just like digital data can be altered, lost and changed, as it can be manipulated, evened out and reshaped back into the initial image using brushes thus creating a collaborative terrain for engagement via bodily gestures.

Ry David Bradley’s artwork refuses both prevalent modes of signification, it is neither a techno utopia, nor an impartial deployment that is used to advance more idealist notions. Instead it remains deeply embedded into materialist constellation, between the depths of scenery and sleek vacuum of cosmos. You can only gaze from above onto the horizon through a darkly glass that distorts and softens the fluid light.

Justinas Vilutis is a student from the Master in Photography at ECAL. He wrote this review about Ry David Bradley's work under the "Contemporary Photography" course held by Kim Knoppers.